If you’ve spent two minutes in the South, you’ve probably heard someone say “y’all.” The word is used as a plural pronoun to address a group of people (i.e. “Hey y’all, dinner is ready.”). It’s a word that is quintessentially Southern, and it’s a word I absolutely adore. Here is why:

There’s something about the word “y’all” that puts people at ease. It’s a casual word; a slang word. There’s nothing stuffy or formal about it. “Y’all” brings to mind humble farmhouses, homemade biscuits, slower times. It feels homey. It’s a great way to signify to people that you want to have a real conversation with them; that they can let their guard down.  I love how using the word “y’all” can help you really connect with someone.

2. It fills a gap in the English language.

As The Atlantic points out, modern English does not have a second-person plural pronoun. The only option we have is to use the word “you” to refer to both individuals AND groups of people, which can be confusing when trying to determine whether someone is addressing a single person or the entire group. The word “y’all” fills this need and makes it clear that you are addressing the group of people, not an individual.

If you aren’t sure about the genders of the people you’re addressing, then “y’all” is a great way to be neutral. It’s also a great term if you try not to use gendered pronouns or try not to refer to groups of people in solely masculine terms (i.e. “you guys”). Y’all is as inclusive as they come!

4. Its origin reflects the diversity of the United States.

I love that the word “y’all” is such a perfect example of how diverse cultures blend and fuse together here in America. While most people assume that it is a contraction of the words “you” and “all,” the truth is that no one is exactly sure how the word originated.  It seems to have sprung from one of two different cultural backgrounds, or a combination of both (source). The first potential early version of “y’all” is the Scotch-Irish “ye aw,” which means the same thing as modern day “y’all.” The second potential origin of “y’all” is African-English Creole. Quite possibly, both the Scotch-Irish version and the Creole version were being used in the Southern U.S. at the same time, and ultimately they evolved into one word. The origins are murky, but the theories point to the beautiful melting pot of the South bringing diverse cultures together to offer the world this great new word!

And that, my friends, is why I love the word “y’all.” What other Southern words or phrases do you love? Let me know in the comments! 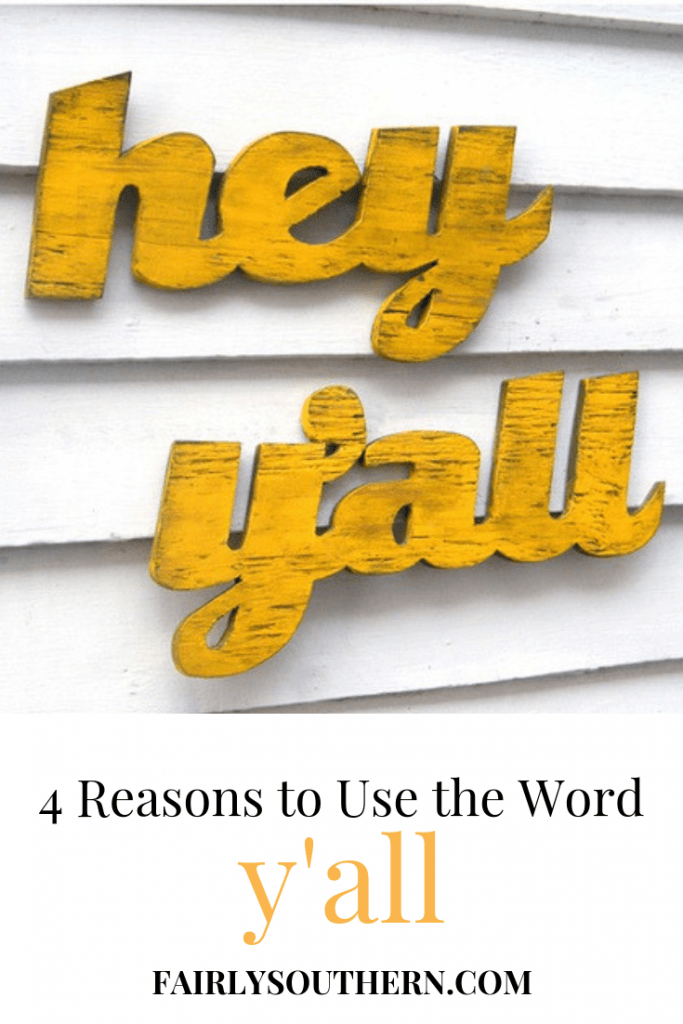