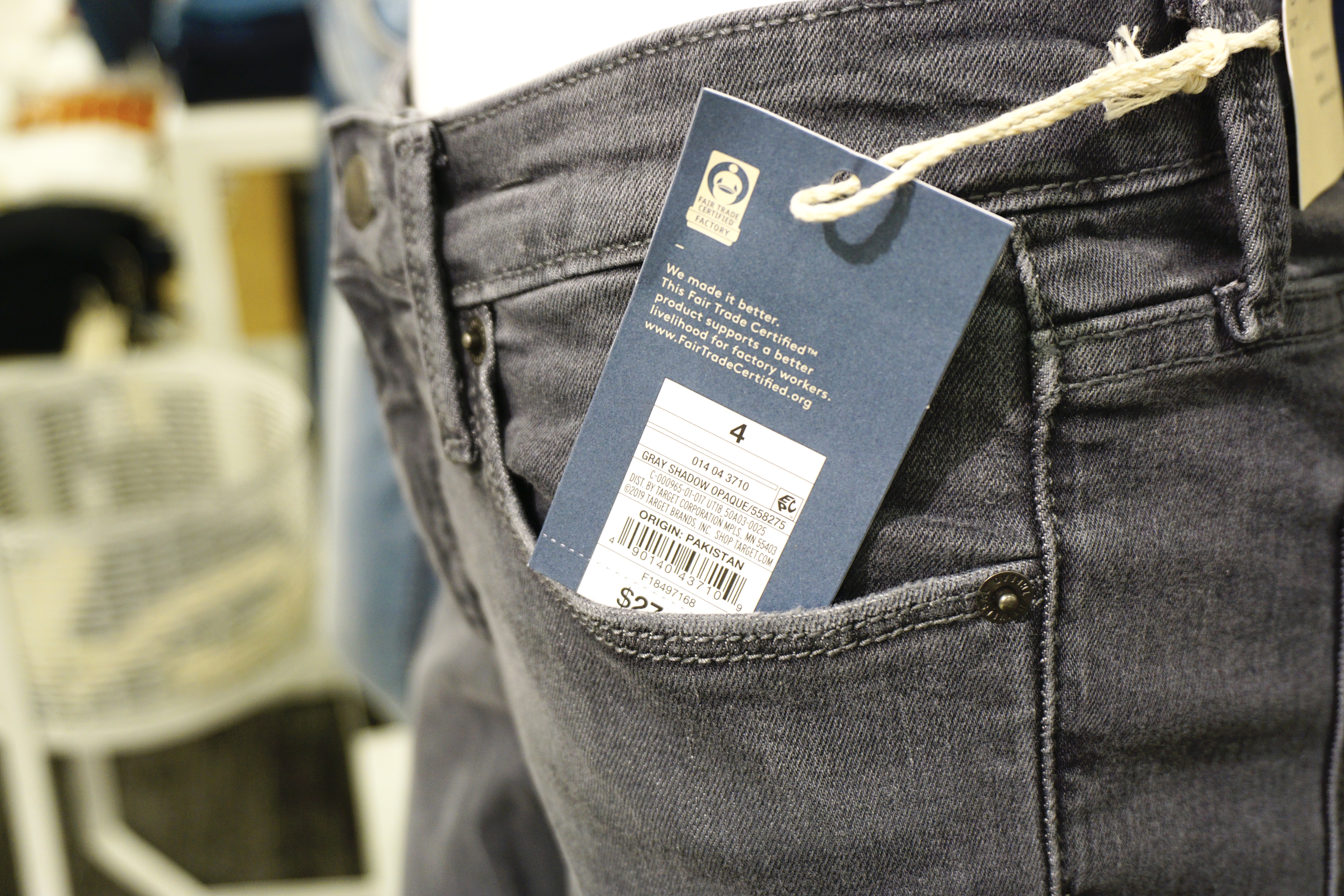 I was PUMPED when Target released its first fair trade denim several weeks ago. When a major retailer like Target begins offering fair trade clothing options, it makes fair trade accessible to so many more people!

I decided to investigate Target’s fair trade denim further. How do you find it? What is the quality like? Does it live up to the initial hype?

I went to several different Target locations to scope out their fair trade denim options and tried on the pants. Here are my honest thoughts!

What is Fair Trade?

A product that is Fair Trade Certified has met certain standards for treating workers well and sourcing materials responsibly. Read more here about why I think fair trade is important.

Where Exactly Can You Find the Fair Trade Denim?

I visited three different Target locations to check out their fair trade denim selection (in case you’re curious: the White Oak, North Hills, and Cary Crossroads locations, all located in the Triangle area of NC). Upon entering the women’s clothing section, it was easy to spot the fair trade denim promotional materials. All three stores had a table set up on one of the main store aisles with a sign that read “Introducing Fair Trade denim.” The sign further explained to look for the fair trade seal on denim tags. Underneath and around the sign were piles of jeans.

Frankly, all of this strikes me as false advertising. If I was walking through a store and saw a sign for fair trade denim right next to several pairs of jeans, I would assume that all of those jeans were fair trade and might make a purchasing decision based on that information. It is incredibly misleading for Target to place the sign next to jeans that aren’t fair trade. And it’s a little odd that the implementation varies from store to store.

Once I actually located the fair trade denim, I tried it on! Here are my pros and cons. We’ll start with the cons so we can end on a positive note with the pros!

These jeans are pretty budget friendly (see pros section below), and the quality reflects that to an extent. If you are used to purchasing high quality or designer denim, you will notice that the material of these jeans is quite a bit thinner. It isn’t see-through thin or anything like that, but definitely on the thin side.

It’s not easy to find the jeans within the store since they aren’t always located next to the fair trade denim sign. It does require a bit of searching and checking tags for the little fair trade seal (see photo below – the seal is in the upper lefthand corner), which hurts the convenience factor.

If you’re shopping online, finding the fair trade jeans isn’t really an issue….you can just apply the “Fair Trade Certified” filter to see all of the fair trade denim options.

Target only offers 10 styles of fair trade denim online, compared to 255 styles of non-fair trade women’s denim. And in store, I was only ever able to find 3 different styles. That isn’t a whole lot of variety or choice.

Here are all of the pros of Target’s fair trade denim line!

All three pairs of jeans I tried on were comfortable, which frankly is a must when it comes to a pair of jeans. Each pair had some stretch, and two of them were soft to the point of feeling almost like jeggings.

All three pairs of jeans I tried on had a flattering fit. They were all skinnies and ranged from mid-rise to high-rise.

My only complaint, if I’m being quite picky, is that the jeans were just a tad looser on me in the calf area than I would like. I have extremely slender calves, so I suspect they would fit most other people perfectly.

The sizing did seem to run a bit large (I sized down one size in two of the pairs), but ultimately it was very easy for me to find a size that fit well. And, Target does offer plus sizes in their fair trade line (praise!).

I am honestly shocked that Target is able to offer their fair trade denim at such a low price point. Two of the pairs I tried on were $19.99, and the third pair was $27.99. I don’t think I’ve paid that little for a pair of brand new jeans since the ’90s!

The $19.99 jeans don’t appear to be available online (again, what the heck with the inconsistency, Target), but the prices online range from $27.99-$37.99. This is incredibly affordable for fair trade jeans!

Target’s fair trade denim gets a thumbs up from me! Despite my irritation with Target’s misleading advertising practices, I would ultimately purchase their fair trade denim the next time I need a pair of jeans because they are so affordable, convenient, and cute. And ultimately, I do love that Target is making fair trade available to the masses.

Okay friends–what do you think? Have you tried Target’s new line of fair trade denim? Were you even able to find a pair? Let me know your thoughts in the comments!