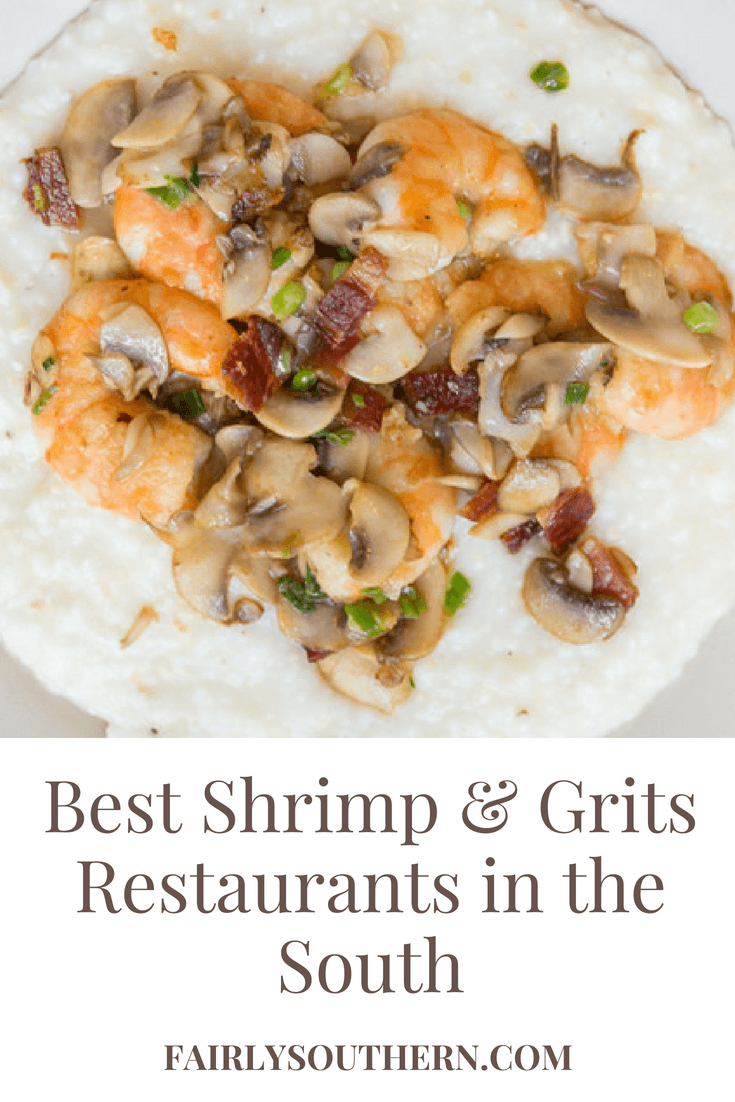 What could possibly be more Southern than shrimp and grits? When I asked y’all on Instagram what you’d like to see in my Southern Traditions series, this was one of the first suggestions!

I confess that I feel a bit underqualified to write about shrimp and grits because, despite the fact that I served it at my very own wedding, I don’t eat it! I just don’t like the taste and texture of shrimp. So, I’ve enlisted a bit of help from my family and my good friend Google to bring you the history of this uniquely Southern dish (sources listed at the bottom of the post), as well as advice on where to find the absolute best shrimp and grits in the South! 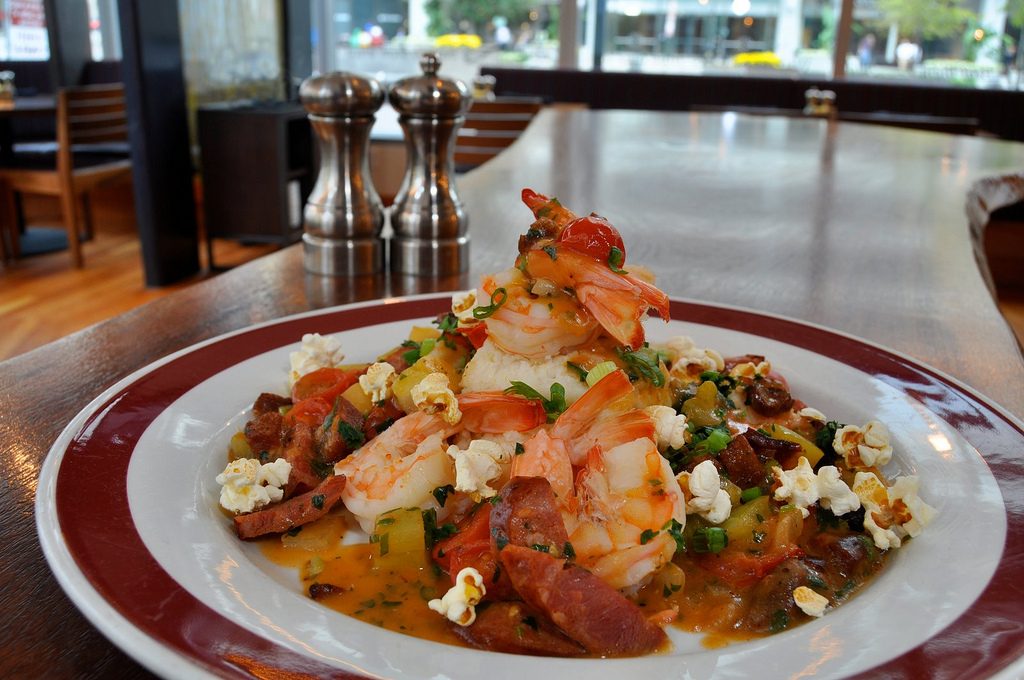 It seems that the first known makers of grits hailed from the Native American Muscogee tribe, who inhabited land that is now part of southern Tennessee, Alabama, western Georgia, and northern Florida. They would grind their corn in a stone mill, giving it the “gritty” texture that led to the term “grits.”

When Europeans settled in the area, they learned how to make grits from the Muscogees. This food tradition was further passed on to Gullah slaves once they were brought to the area. Because shrimp and fish are abundant in the marshes of the low country, they were often cooked and added to grits as a breakfast dish. It was humble, local, country cookin’.

The dish didn’t become elevated to finer dining menus until 1982, when chef Bill Neal of Crook’s Corner in Chapel Hill, NC, added shrimp and grits to the restaurant’s menu. His recipe called for cheesy grits topped with jumbo shrimp, mushrooms, and bacon. A journalist from The New York Times visited the restaurant and published Neal’s recipe in 1985, catapulting the dish into the foodie spotlight.

Since then, shrimp and grits has become popular as a dinner entree throughout the South. Preparation style can vary–you will see a variety of different sauces, cheeses, and styles of grits, as well as additional meats (often sausage). 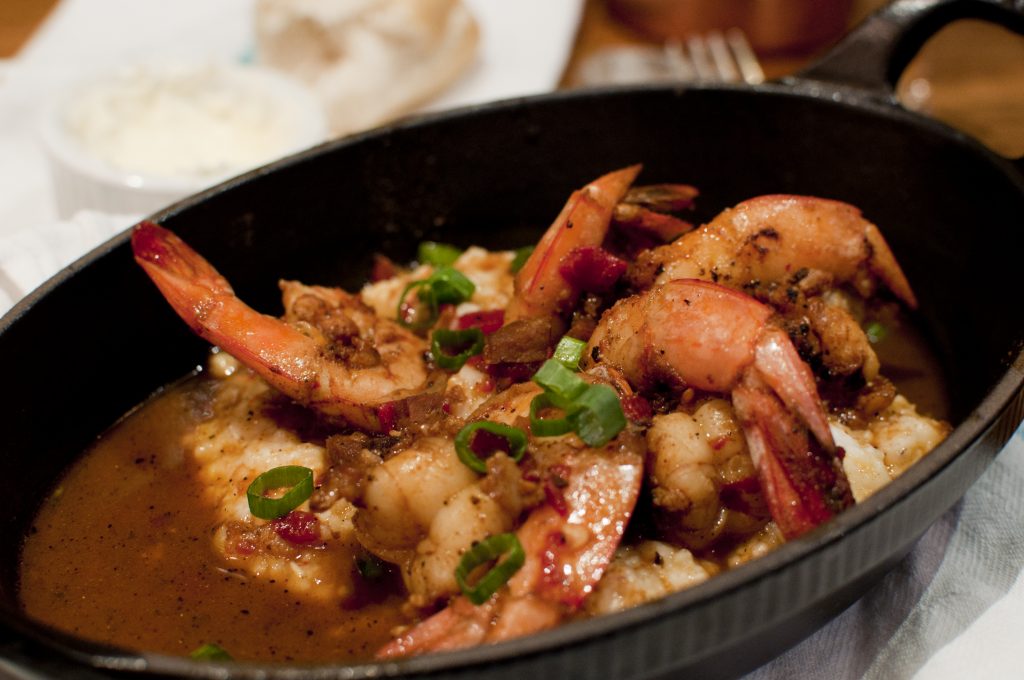 There are hundreds of places to eat good shrimp and grits in the South! Here are a few suggestions, cultivated from family members, publications, and restaurant reviewers:

2. West Egg Cafe, Atlanta, GA. Chef Andrew Smith of West Egg Cafe won the 2016 Shrimp and Grits Festival in Georgia with his take on shrimp and grits. Smith’s dish features a poached egg, spicy andouille sausage, tomato white wine butter, and okra. The festival features the top chefs from the entire state of Georgia and is hosted annually by Southern Living (the 2017 festival was cancelled due to Hurricane Irma). Anyone who is considered “the best” by Southern Living has got to be fabulous!

3. The Old Fourth Street Filling Station, Winston-Salem, NC. My hubby orders shrimp and grits often, and these are his very favorite. Naturally, this is because the grit cake is fried, and the dish comes served in a chipotle cream sauce.

4. Hominy Grill, Charleston, SC. Hominy Grill is listed on every list I’ve consulted for the best shrimp and grits in South Carolina, including Trip Advisor, Yelp, Foursquare, Eater Charleston, and Only In Your State. I mean, the restaurant mentions hominy (aka coarsely ground corn) in its name, so it has to have pretty decent grits, right?

6. Classic On Noble, Anniston, AL. The Internet seems to unanimously agree: The shrimp and grits at Classic On Noble is to die for! It is served alongside collard greens, another quintessentially Southern dish that is something everyone should try at least once!

7. Narobia’s Grits and Gravy, Savannah, GA. Garden & Gun listed this restaurant as having some of the best shrimp and grits in the South, and I think it is definitely worth mentioning because of the homey vibe of the restaurant. This is a soul food joint with affordable prices, not a fancy dining institution. Fitting for a dish that started out as a simple breakfast for locals! This is a pork-free option in case that is something you’re needing.

Anyone hungry yet? I don’t even like shrimp, and I’m drooling after writing this post! Let me know your favorite place for shrimp and grits in the comments.  Pay it forward to another hungry Southerner!